House progressives say they can bring down the bipartisan bill if they do not get their priorities too, but as White House lobbying steps up, other Democrats have different ideas. 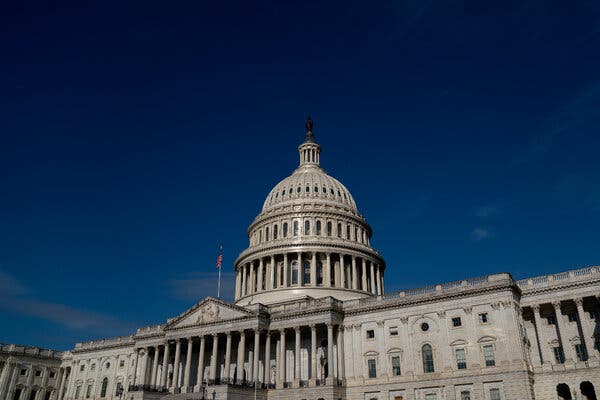 The infrastructure deal has the support of five Republican senators, but must get five more to beat a filibuster, and even more if any Democrats peel away.Credit…Stefani Reynolds for The New York Times

WASHINGTON — Liberal House Democrats, squeezed between President Biden’s personal lobbying for a bipartisan infrastructure deal and their own ambitions for a far more expansive domestic agenda, are warning that they will not hesitate to bring down the accord without action on their long-sought priorities.

The brewing fight, which pits progressives against moderates more aligned with the president’s tactics, is exposing cracks in the party’s fragile strategy for enacting its economic plans.

Democratic leaders have said the Senate centrists’ agreement, which would pump $1.2 trillion into roads, bridges, tunnels and broadband, will not get through Congress without a second, larger bill. That measure includes progressive wish-list items that Republicans have rejected, such as universal preschool and community college access, a health care expansion and a broad effort to combat climate change.

But progressive House members have begun questioning the depth of that commitment, particularly after Mr. Biden walked back a threat he made to condition the narrower bill on the more costly one, and as he and other administration officials begin a lobbying blitz around the country to build support for the infrastructure package.

On Tuesday, Mr. Biden will promote the deal in La Crosse, Wis., the home district of a long-targeted House Democrat, Representative Ron Kind. And on Monday, Pete Buttigieg, the transportation secretary, toured a crumbling tunnel to Manhattan with two New Jersey Democrats, both of whom said they came away convinced that Congress should move now on infrastructure.

“We’re going to do what we should have done from the start, which is to try to pass this good bipartisan bill, and then Democrats, as the majority party, will try to legislate,” one of the representatives, Tom Malinowski, said after the visit with Mr. Buttigieg. “There’s no need for drama around that.”

Representative Josh Gottheimer, who was also on the tour, said the bipartisan infrastructure deal was historic on its own and “something we should celebrate by getting it passed as quickly as possible.”

But the fear among liberals is that if the bipartisan measure gathers enough momentum to quickly pass, some Democrats — particularly centrists like Senators Joe Manchin III of West Virginia and Kyrsten Sinema of Arizona — will lose their appetite for another major economic package, or will force progressives to substantially scale back the scope and cost of any such plan before they are willing to vote for it.

Progressives in the House warn that their support for the infrastructure agreement is contingent on the success of the bigger bill, which could amount to several trillion dollars and which Democrats plan to push through using a budget maneuver known as reconciliation to shield it from a Republican filibuster.

“The president can say he’s bipartisan, he can go out and support the deal, but at the end of the day, if he wants it, he’s going to have to support our priorities,” said Representative Pramila Jayapal, Democrat of Washington and the chairwoman of the Progressive Caucus, which represents 93 House members.

The pressure will rise. Mr. Buttigieg’s trip to New Jersey and New York on Monday included Senator Chuck Schumer, the majority leader, and it centered around perhaps the biggest infrastructure priority in the region, a pair of long-sought rail tunnels into the city.

As Mr. Biden visits La Crosse, Tom Vilsack, the agriculture secretary, will also be in western Wisconsin to promote the potential benefits of the infrastructure compromise to rural communities.

Representative Ilhan Omar of Minnesota, the chief vote counter of the Progressive Caucus, had a blunt message about the administration’s lobbying effort.

“I think it’s really important to know that nothing is going to get accomplished by doing that,” she said. “It’s clear a majority of the Democratic caucus, whether progressive or not, is interested in delivering, and that delivery will only happen if the progressives are on board.” 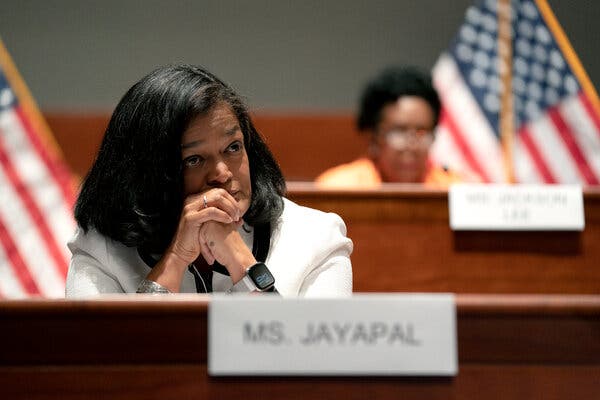 “The president can say he’s bipartisan, he can go out and support the deal, but at the end of the day, if he wants it, he’s going to have to support our priorities,” Representative Pramila Jayapal said.Credit…Stefani Reynolds for The New York Times

But Republicans are already working to pressure Democrats to decouple the two measures.

“The president has appropriately delinked a potential bipartisan infrastructure bill from the massive, unrelated tax-and-spend plans that Democrats want to pursue on a partisan basis,” Senator Mitch McConnell of Kentucky, the minority leader, said in a statement on Monday. “Now I am calling on President Biden to engage Leader Schumer and Speaker Pelosi and make sure they follow his lead.”

Both have said the two measures will move on parallel tracks, and Speaker Nancy Pelosi said last week that there would be no infrastructure measure without a reconciliation bill.

Biden’s Agenda ?Updated?June 28, 2021, 8:09 p.m. ETHouse passes legislation that would strengthen scientific research.Pelosi may put a Republican on a proposed committee to investigate the Capitol riot.The head of H.H.S. says care of migrant children is improving, but urges Congress to act.

The legislative two-step is tricky. The infrastructure deal has the support of five Republican senators, but must get five more to beat a filibuster, and even more if any Democrats peel away. At the same time, Democrats must unite around a reconciliation bill on social and climate spending that cannot be too big for moderate Democrats but also cannot jettison so many liberal priorities that it loses the left flank.

Mr. McConnell’s push to delink the bills and pass an infrastructure deal on its own was quickly embraced by some Republicans whom the centrist senators badly want to persuade to support their compromise. Senator Mike Braun, Republican of Indiana, followed Mr. McConnell’s statement with one of his own saying the compromise on infrastructure was “a bad deal so long as President Biden, Speaker Pelosi and Leader Schumer insist on pursuing a multitrillion-dollar tax-and-spend reconciliation package.”

All of that is prompting House liberals to worry that Mr. Biden and moderate Democrats will take the infrastructure deal now, rather than play for the larger package later.

“We want to make sure that our communities are represented in federal legislation,” said Representative Alexandria Ocasio-Cortez, Democrat of New York, “and the fact of the matter is that these bipartisan deals are often very exclusionary of working-class communities and of communities of color that really badly need infrastructure investments.”

The House Progressive Caucus is pushing for a bill that addresses five categories: the “care economy,” which includes paid family leave, universal child care and $400 billion for long-term health care; Medicare expansion to lower eligibility to age 60, widen coverage to vision, dental and hearing, and empower the government to negotiate prescription drug prices; climate change measures, including a clean-energy standard for electric utilities and a civilian climate corps; a path to citizenship for essential immigrant workers; and low-income housing.

Senator Bernie Sanders, the Vermont independent who leads the Budget Committee, sees putting all of that into a budget resolution in July that could cost $6 trillion. Other Senate Democrats say they want a much smaller package.

But House liberals are in no mood to give up their priorities while giving Republicans their infrastructure spending. Progressive Caucus leaders have been actively canvassing their members to show Ms. Pelosi how cohesive and serious they are, Ms. Jayapal said.

ImageSenator Mitch McConnell’s push to delink the bills and pass an infrastructure-only deal was quickly embraced by some Republicans.Credit…Stefani Reynolds for The New York Times

Ms. Omar said House liberals would meet this week with the House Budget Committee chairman, Representative John Yarmuth of Kentucky, as he begins drafting the House budget blueprint, and had been in constant communication with Mr. Sanders.

“On this, the last thing you want is progressives saying, ‘We’re voting no because they’ve sold out climate, education and child care,’” said Representative Ro Khanna, Democrat of California, who predicted a united left flank would bring down an infrastructure-only bill.

Moderate Democrats in the House and the Senate are similarly working together to head off such a result, said Mr. Gottheimer, who used language like that deployed by Senate Republicans: “I don’t think we should hold our infrastructure hostage.”

Representative Rick Larsen, a Democrat whose district north of Seattle is sweltering under record-breaking heat, said a House surface transportation bill set for passage this week would lay down yet another marker for House and Senate negotiators. That bill includes climate-related funding not in the Senate deal, to replace diesel-powered buses and ferries with zero-emissions versions and pump record sums into mass transit and rail. It is strongly opposed by House Republican leaders.

Mr. Larsen, a senior member of the Transportation and Infrastructure Committee, said the bill should help shape any final deal, which Democrats hope to produce before existing transportation programs expire on Sept. 30. For the first time in more than a decade, the House bill also includes member-requested earmarks for home district projects, giving lawmakers more of a personal investment in it.

“House action keeps the momentum moving on the Senate bill and on a final deal,” Mr. Larsen said. “What it looks like at the end, I can tell you when we get to the end.”